When shards are not a “lucky break”

Customer complaints were piling up: the bottles used for a well-known nasal spray were breaking right at the neck,making the spray unusable. Not to mention the risk of injury to patients. But why is the brown glass breaking right at the shoulder? Is it the glass? The attached spray head? And why is this fault occurring at all, and so erratically?

“The customer was at wit’s end, all previously implemented optimizations at the involved production locations did not lead to relevant improvement, let alone alleviate the problems,” says Thomas Lüftl, corporate consultant and Six Sigma Master Belt from Munich with many years’ experience in pharmaceuticals production. “Our systematic approach led us step by step to the true causes, not least because all parties involved really did come together.” The result: Thanks to optimization and strict monitoring of processes, the number of rejects was reduced significantly.Thomas Lüftl: “Fewer rejects in this case meant additional revenue of several 100,000 EUR per year.” 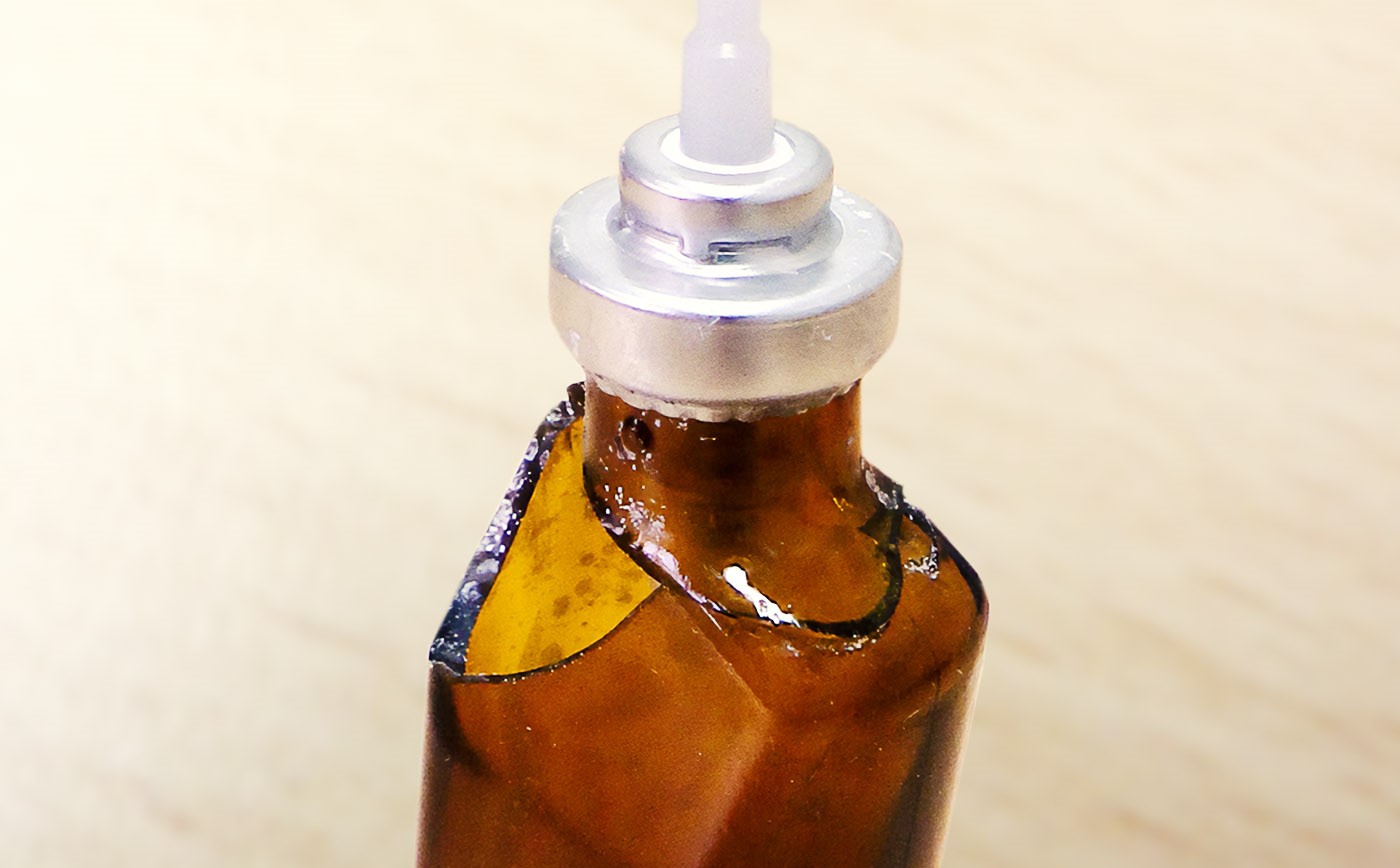 Only one thing was clear: The customer complaints about the broken spray bottles were only the proverbial tip of the iceberg, in production they have more precise figures. The deviations from the norm had been investigated for two years already. To no avail. The devil is in the details, faults can occur at different places in the production process.For instance, small and minute cracks or other irregularities can occur as the bottles are blown, then during the handling and transport of the finished bottles, or if the crimper is off center or worn during the crimping process.Added to that are the stop-and-go of the system, rapid cycles with lots of micro-stops, quick braking and re-starting movements.

That made it clear: All of these influences lead to deviations that culminate in breakage of a bottle if they reach a certain degree of severity. So the quality of the bottle (Y) is made up of many small influencing factors (X): Y= f(X1,X2, X3, X4, X5, …..)“Determining this function and then finding out which of the many influencing factors are relevant, that is the challenge,” says Thomas Lüftl.

The corporate consultant proceeded systematically according to the proven 9-step method used in the customer’s organization:

8.      Recognize the limitations of the process

For more than two years, a wide range of measurements and analyses had been applied to get to the bottom of the problem,but with little success. Thomas Lüftl: “We had to proceed much mores systematically and analyze much deeper. To do so, we looked at the complete process across all organizations that were involved, had to find the key influencing factors, obtain all production data and analyze them comprehensively.

We then discussed these data and some initial conclusions in a joint workshop, and generated further fault hypotheses, the next steps of analysis and the first optimization ideas. “The key to finding the solution was that we brought the responsible parties and specialists together and were able to talk to them about the topic without tunnel vision and without concerns about anyone’s own sensitivities. Nobody tried to blame the other for the ‘fault,’ says Thomas Lüftl. “That way, we were able to determine a coordinated cause analysis and define initial production optimization steps.”

A crucial fact was that the production process wasn’t always producing bad quality, after all. But when and where didthe deviations come in? Why? What was different? How could the accumulations offaults be explained?

Was the bottle geometry the cause? Or was it a process control issue? Thomas Lüftl approaches the problem with the methods from the Six Sigma toolbox: “It was important above all else to analyze the huge amounts of production data – and that ultimately was the key to finding the solution.”

Break analyses were conducted on site at the production location, the faulty bottles examined according to the latest state of the art, revealing even the most minute cracks that were not visible automatically and had previously passed the visual inspection. “Sometimes I go around like Sherlock Holmes with a magnifying glass,” says Lüftl. Taking a very close look paid off in this case, too: There was a statistically significant accumulation of faulty glass batches at certain times of day and at certain tools.“That could only be detected with the help of statistics,” explains Thomas Lüftl. But what can be the reason for these anomalies and irregularities? These initial results were the starting point for the workshop with all involved parties.

The result in a nutshell: When the bottles are blown, the blow mold does not open optimally, which leads to tension in the glass and subsequently to cracks and damage. The solution isclose monitoring of the bottles (20,000 are produced per hour) while they are hot and then after they are quickly cooled to room temperature, a precision adjustment of threshold values of the glass material. It is the only way to detect the finest hairline cracks. In addition, the blowing tools are fine-tuned, or re-adjusted during ongoing production.

A systematic approach to fault detection with comprehensive data analysis brought lasting success. Thomas Lüftl: “But the key to the whole thing was the joint workshop with a great degree of openness and fact-based discourse. Without the knowledge and support from the experts at the local plants we would not have come this far toward reaching our goal.” That goal being high customer satisfaction and significant increase in revenue at the same level of machine utilization and less reject costs. In this case: No shards are the “lucky break” ....